Happy Valentine’s Day, everyone!! Well… Happy POST Valentine’s Day/Weekend. I hope that you all were treated as nicely as you deserved by somebody special in your life, whether it be a significant other, family or friend… it’s not always physical love that needs to be celebrated.

Max and I celebrated on the 13th since my beautiful and amazing friend Danielle came to visit from the 14th until today (!!!!!!), and Max chef-ed me up a delicious dinner that put me in a mild food coma – it was a mozzarella bake dish that included sausage, sauteed spinach with garlic & olive oil, gemelli pasta, roasted red peppers and pesto. ‘Twas yum.

He also ate about 10 of my brownie-swirled cookies in around 3 hours, which was awesome that he loved them so much, but I can’t say I would recommend consuming that many in such a short period of time. I think that at this point – a mere 4 days later – he has already polished off the two plates that I gave him. Zut alors.

Anyway, Danielle arrived on the 14th and we just spent the weekend hanging around and enjoying ourselves; it was lovely. I took her to Raw Bobs and The Rock Spot for some climbing, we became mildly addicted to the show Girls (I recommend watching it – if you’re okay with nakedness; it’s hilarious and so so strange), got a little swilly with some red wine during the snow storm that we had, and we even created a beautiful snow maiden named Crystal Iceis. She’s a classy broad with nipple tassels. Yes, you read that correctly.

The main reason for Danielle’s visit however was because I bought us tickets to the 6th Annual Cat Country Snowball, which was on Sunday the 16th.

We are both pretty die-hard country fans, and Rodney Atkins was the headliner, with other performances by Parmalee and The Henningsens.

It was an amazing time. The venue was spacious, beautifully decorated with a silent auction and reasonably priced food and drink (woo!), the performers were perfect, the guests were all friendly – except for one girl fight that broke out between two 40+ year old women… so not okay – and all the proceeds went to benefit “Go Red For Women“, which is via the American Heart Association to fight against heart disease in women. When people with better video cameras than myself start posting videos I will be sure to spread the love, but for now pictures will have to do!

So that’s how I spent my Valentine’s Day weekend! Good friends, good food, good times – how most weekends should be spent! Or everyday for that matter…. stay beautiful darlings.

Bonjour! I’m once again in the French Coffee Shop “studying” my arse off for my Culture & Society exam tomorrow… eek. I really have been studying, but I need a mental break from all this nonsense. BLECH EXAMS — je les deteste.

Sunday, November 25th: We were supposed to leave the hotel by 9h00, so I was up and munching down another tasty breakfast by 8h00, but one of our lovely API family members (whom shall remain anonymous) never made it back to the hotel the night before *coughfrenchlovercough* so there was a mad search around the city until said person was dragged out of a locals bed. Teehee, I love my group. We probably ended up leaving passed 10h00, and then we were piled onto the bus once again for the dreaded ride back to Grenoble. 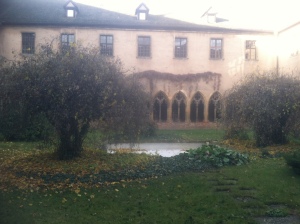 In order to break up the monotony, though, we made a two hour pit stop in Colmar, which is an hour away from Strasbourg to discover this lovely town’s marchés de Noël (Christmas Markets). Obviously, it was not as awesome as Strasbourg’s, but I bought a tasty honey lollipop and another Christmas present for a family member. We also did a quick walk through of le Musée d’Unterlinden, but if I’m being honest… the museum kind of freaked me out a little bit. I took some pictures, so you can see for yourself, and if you agree with me or not. 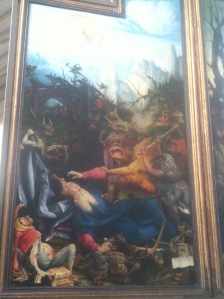 In case you’re interested in some factoids about Strasbourg and Colmar, I copied and pasted them from our itinerary below. It’s in French — sorry, I’m too lazy to translate for you… just use google translate if you’re curious:

Well, there you have it! Haha, I’m sure most of you didn’t understand a lick of that, but maybe that will be incentive for you to learn a little French 😉 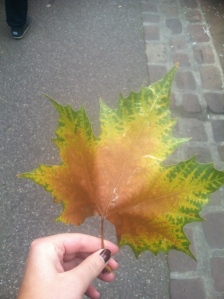 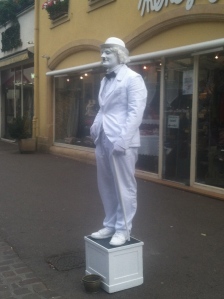 Anyway, after we finished our stop in Colmar, we continued on and sat on that dang bus for hours on end. I thankfully fell asleep for a little, so it didn’t seem as bad. We arrived in Grenoble close to 20h3o I think, so I made it just in time for dinner with Madeleine. Wahwahweewah. I was supposed to go to a party for my classmate, Kevin, but I was so exhausted that I had to bail on that fete. Hannah wasn’t pleased, but I wouldn’t have been any fun. So instead, I took a shower and passed out into a much needed slumber.

Monday, November 26th: Had the usual nonsense and was at school from 10h40 to 17h30 for classes, and afterwards I went with Hannah, Richard and Emily to renew our tramcards for the last time! Ahhh, so sad. It was actually a rough time because while I was waiting in line, I was going in on a semi-stale gummy, and I broke my built in retainer! There aren’t any dangerous sharp points in my mouth or anything, but it is definitely broken, and if you touch the right spot, it is sharp. Woops. I mean, I was supposed to get it out once I turned 21, but I just didn’t have time over the summer. My mom is making me an appointment for once I’m back in the states though, so this won’t be in my mouth for too much longer.

After my dental issue, I walked through the Grenoble Marche de Noel to see what it was like (it opened while we were in Strasbourg) and browse the shops. I ran into Max while I was there, so we explored it and I ate this tasty little number:

After 8 Mousse on a Waffle Encased in Dark Chocolate.

It was delicious, and would not be my first rendez-vous. After we explored some more, I had to go home and do the usual homework and personal cleansing routine, then I read some 50 Shades of Grey, and went to bed. Cheeel.

Tuesday, November 27th: Another rough, long day of classes. I actually ended up skipping my Translation class a) because the professor sucks and b) because there was a hockey game this night, and I really wanted to go, but I had my last big homework assignment due on Thursday, but since I wouldn’t be in class (ROMA ROMA), I had to hand it in on Wednesday, so I spent those 2 hours where I should have been in class doing homework. It felt good to be productive, teehee.

After my Literature class was over at 17h15, I went home to eat some dinner and get ready to go to the hockey game. Madeleine wasn’t home, so I was able to eat while burying my nose in 50 Shades. The weather ended up being terrible, and the hockey game was more expensive than usual due to it being the semi-finals (we lost…mer), so I didn’t end up going. Instead, I had a movie night and watched Cool Hand Luke — I had never seen it before, and I must say I really liked it… except for the less than happy ending. Oh well.

Wednesday, November 28th: SNOW IN GRENOBLE!!!! Usually at this point in the year, I am used to being bombarded with snow due to living in Vermont, but I was spoiled this semester. I can’t say I was entirely thrilled for the snow, it was cold, but it did make Grenoble look even more beautiful than usual.

Erm, after class, I think I went to the Coffeeshop to either dick around, work on this darling blog, or do some homework. I can’t really remember, but I know I didn’t hang around for too long. Then, I went to the train station with Emily and Nina to buy our bus tickets for the next day to Lyon, and we made a pit stop in the 2 euro store, where I bought this:

We also walked around the Grenoble Markets, where I bought some more Christmas gifts (seriously, I am beyond broke it’s disgusting) and another one of those tasty morsels.

Eventually, the cold got the best of us and we parted ways. I went home to read some 50 Shades and pack for ROMA!!! I had to be up pretty early the next morning to make the bus, so after dinner I just relaxed and went to bed shortly after. Week of school = complete. Next stop: ROME, BEETCHES.