Hello, beautiful dearies. I would like to start off saying that I’m sorry I’ve been such a terrible, awful blogger this past year. I had a lot going on, you know… with the whole graduating college and starting my big girl adult life (kind of). As a quick re-cap:

– I graduated with two degrees; one in English and another in European Studies from the University of Vermont in May 2013.

– Before I even graduated, I was hired by a local RI business called “The Newport Dinner Train” to head and basically manage an entire new subsidiary of the company, called “The Ice Cream Train”. Let me just tell you… I KILLED IT. Ask me for more details if you are interested, and you should totally google it or something, we got press like it was nobody’s business. However, it was seasonal and only ran from June until September, but we’ve got a strong second season in our sites.

– While managing the Ice Cream Train, my boss was so pleased that he made me the Social Media and Marketing Manager for the entire company, and I received yet another promotion in September to be “The Polar Express” Manager, another subsidiary of the business, which ran in November and December. I had a grand time learning the ropes and managing a small company, and I am so grateful for the opportunities that were given to me. I worked a crap ton and definitely had chunks of extreme exhaustion, but I’m young so this is the time to do it!

– Since the train is a seasonal business, I had to find something from January – March to fill my time and my pockets (darn student loans), so at the end of August while I was scouring the depths of Craigslist, I found an ad and was hired to be a Mixologist at a local juice bar in my home town called “Raw Bobs”. Let me tell you, balancing both jobs and working 55+ hours a week wasn’t my idea of a blast, but I LOVE the juice bar. Seriously, I’m obsessed. So much so that I have now made it my goal and dream to open up my own someday, but more on that to come. Raw Bobs is a very new business (we opened in May), so it’s been an immense pleasure being able to be a large part (I’m one of 5 employees, owner included) of a company that has huge plans and aspirations to help people “eat real and be well”. Not to toot my own horn or anything, but my boss really likes me – she’s an amazing woman –  and I am basically the organizer of the whole shop *yeah mild OCD skills*! We’ll see where this takes me!

– Anyway, now I’m getting into a winter groove; because there is no train and the juice bar isn’t hopping too much in the winter (though we are getting busier by the day thanks to being featured on the cover of RI Local for the January issue), I’ve got time on my hands that I haven’t had since my last semester of college – oh the good ole days where I only had one class….

– So what to do with this thing called free time?! First, I want to get back into blogging. I also want to start changing what I write about a teensy bit, mostly because I want to start a blog for Raw Bobs sometime soon, so I need to start incorporating healthy living sturffff into my posts, so stay tuned for those. Up until two weeks ago, I wasn’t so bored because Max was on break, but now that he has classes again I have to entertain myself, and you guys too… duh.

– Once I moved back home in May I started becoming a regular at Gold’s Gym (5 or 6 days a week, bitches)… I’m getting buff! Well, maybe not buff because I don’t particularly want to look like a man, but I’m getting to be pretty toned and there’s a solid four pack in my abdominal region, and hopefully it’ll be a six-er soon, but I won’t show off until then! Max lifts weights so he’s helped me get some good exercises in (I’ll share those too in the future), and I’m a quick study so it’s really paying off. I feel good, really good. All of you out there should definitely get on this band wagon, it’s so worth it. I can now leg press 230lbs for 10 consistent reps 😀 Not bad for a chick that weighs 130!

– Another hobby that Max and I have picked up as of 3 weeks ago is Rock Climbing. IT’S SO FUN OMG. We go to this place called “The Rock Spot” a few towns over, and I just recently bought a membership there. Obviously, I’m no Dan Osman by any means, but it’s a fantastic workout and just a freaking bundle of fun. Get at me if you have any questions or are interested, I’ll show you the ropes (pun intended). I’ll start posting videos and tips on this hobby too once I get a little more experienced. If any of you have any pointers, I’m all ears!

– Well, that’s pretty much what I’ve been up to this past year. School/Work – Graduation – WorkWorkWork – Here I Am Now. I haven’t been traveling as much as my little heart desires because of the fact that I was working more than full-time – gotta make that dough, doe –  but I was able to make it to a day of Camp Bisco over the summer, and I spent a few days (6) in NYC with Max visiting my beautiful amazing friend Aly (she lives in Brooklyn) to go to the Disco Biscuits New Years Eve NYC Run!!! Max and I went to three shows, the 28th, 29th and 31st, and they absolutely KILLED it. I have to steal the videos from Max because my phone camera is awful, but once I do I will share the love with all of you awesome peeps. Aly’s birthday was the 30th so we partied for that, and other than that we just enjoyed the city and the company of friends. It was a nice hiatus after killing myself working The Polar Express.

– Other than NYC, I just came back on Tuesday night from visiting yet another beautiful amazing friend, Sarah, in Syracuse, NY for a quick 4 days. We basically were lamps since Syracuse is an arctic tundra, but we went to this awesome place called Tinker Falls and I put my climbing skills to good use by climbing up the ice and snow to get under the frozen waterfall. IT WAS AWESOME. Check out the pics below, courtesy of Sarah.

From a far away glance 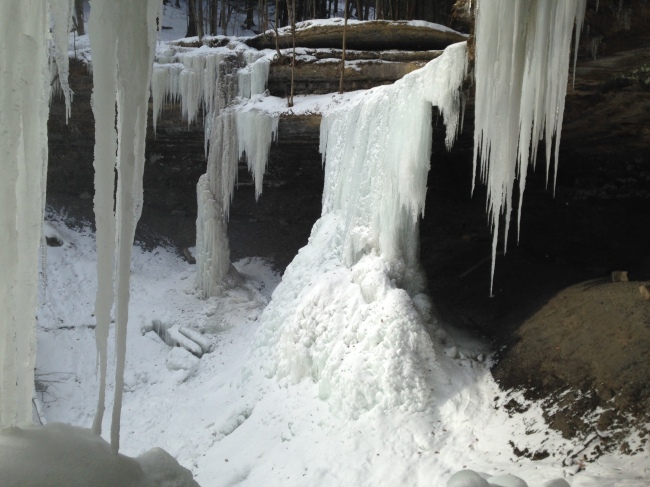 After making the treacherous climb to beneath the frozen waterfall! 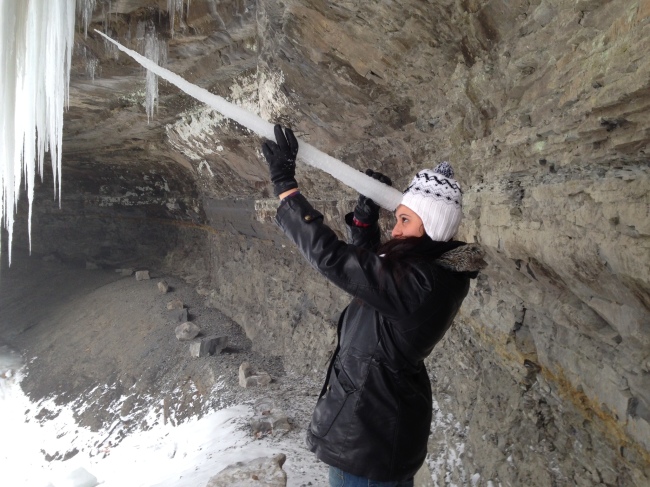 My spirit animal (Unicorn) thanks to a giant icicle.

So there you have it! That’s my life in a quick nutshell. I promise I’ll be way way better at blogging in days/weeks/months to come, so stay tuned, I’m planning on doing big things and you guys can come along and follow me on the journey. 😉 Keep being awesome!