I came across this post years ago, and it just kept slipping through the cracks. It may be outdated, but it is still such a powerfully relevant topic, that it would be wrong not to pass on.

A quote from the artist sums up my thoughts pretty perfectly:

We pass people in the street every day and only see their veneer. What they feel comfortable showing to the world often tells a different story to their private battles. Under the Red Dress is a project which attempts to tell those silent stories that people are not only wanting to tell, but that people want to hear. Everybody likes to be reminded that the person next door is only human, as they are.

In today’s day and age, it is so hard not to get caught up in the superficial way of life. It’s no ones fault, but it doesn’t make it right. We can be so cruel to one another, so quick to judge, and you never know the effect you are having on another person by acting a specific way. This goes for the positive side of the spectrum as well; you really do not know how much your words or actions can influence another soul.

At the end of the day… just be kind. We all have our battles and burdens, and it really does make a difference when you know you have people rooting for you.

Hey babes! I haven’t quite finished my re-cap of Florida, so without further ado…

Wednesday was the final full day of our short-lived vacation. Max and I had watched an intense climbing documentary the night before, so we had it in our heads that we were going to try out another rock gym. To make this happen as soon as possible, we had some breakfast, got dressed and made moves. Max’s mom took the day off from work to spend it with us, so we wound up piling myself, Max, Mindy, Mary and Mindy’s mom, Rita, into Mindy’s tiny car (it was a tight squeeze), dropped Rita off at the casino, and the remainder of us went to check out the rock gym.

At first, it was a fail. The gym we go to here in RI opens up at 10am everyday, so we figured that was the norm for rock gyms. Apparently not. Vertical Ventures, the only rock gym that we found in the Tampa area, didn’t open until 2pm. However, we showed up at 11:00. Herm.
We were dead set on going climbing, so we had some time to kill. What did we do? EAT! 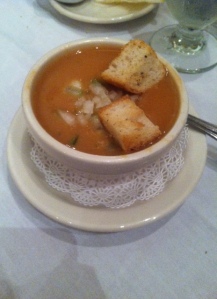 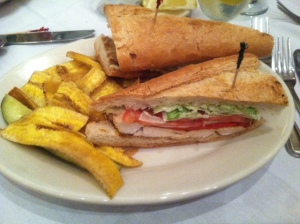 Mindy (Max’s mom) had been telling us about this Cuban restaurant, named Columbia Restaurant, with excellent reviews our whole trip, so since we had the time, we finally decided to go check it out. It was a pretty sweet place if I do say so myself. It is a theater at night and the whole overall decor of the restaurant is awesomely unique. Plus, the food was great!

In case you’re curious as to what is pictured above, the first is “Gazpacho Andalucia”, which is a cold soup of puree of tomatoes, green peppers, onions, cucumbers and garlic, and topped with diced vegetables and toasted Cuban croutons. A fantastic choice in the Tampa heat. Second, was “Mojo Chicken”, a mojo-marinated char-grilled breast of chicken that was melted with Swiss cheese, roasted peppers, lettuce, tomatoes and alioli sauce on Cuban bread. It was also served with plaintain chips, but I’m not a fan of those because a) the flavor and b) they aren’t as good for you as one may think. However, the sandwich was divine and I definitely recommend giving this place a taste!

After a successful gorging session, we made our way back to the rock gym (it took us about 25 minutes, long enough to digest a little bit) and started climbing! It happened to be Ladies Discount Day, which meant I only had to pay $20 for everything – CHYEAH. 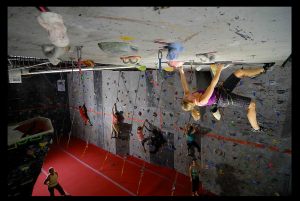 This gym was quite different from the one in Orlando – it had a slack line and this moving rock wall, along with various other exercise toys to do that would accentuate a climbing workout. That stuff was pretty cool, but I did not like how hot and stuffy the gym itself was; it was small and had no ventilation… combine that with Florida heat and I was sweating up a storm. However, the routes were a good challenge and I had a pretty decent climb. I’ve got to say, people who rock climb in general are such nice people! They’re always willing to help you out and give advice, and they sincerely want you to do the best you can, which is such a breath of fresh air. I’m used to the riding world where 50% of the people are total jerks; so unnecessary.

Anyway, we wound up being at Vertical Ventures for 2+ hours, so I was completely spent afterwards. When we got back to Mindy’s place, Max and I showered, watched some television, then went for a 30-minute walk to the nearest Wa-Wa to get some cold beers. It was nice, just checking out the sights. We spent the rest of the night sipping said beers (I bought a six-pack of 60-minute IPA for us to share) and watching Men In Black III. A great final night.

Thursday morning we had to catch a plane in Tampa at 8:15am, so we were out the door by 6am and by some miracle, both of our planes were on time and we landed in Providence at 12:15, so I was able to make it to work in time for 2. Gotta make that money! 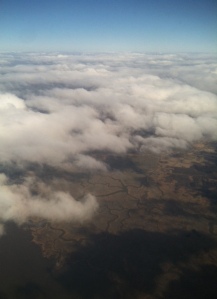 View From The Plane

All in all, it was a fabulous mini-vacation. Yes, we may have only gotten 3 days, but we made the most of them and got to visit two different climbing gyms and eat so much good food. That’s all a girl needs sometimes. I was very excited to come home and make juices though — Florida is seriously lacking in that regard. Don’t worry… I’ll fix that someday 😉